I remember following instructions driving in the countryside of Massachusetts and later in Ontario trying to find a NUDIST club. “Third side road, 22 nd yellow mailbox, large triangle” or similar words. It was like finding a drug dealer. Near Denver, the directions were vague in the extreme so my tired wife and I gave up and drove into the city and stayed in a hotel. 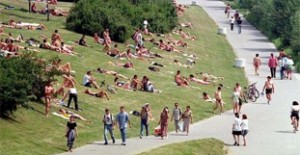 What a nice change to move to Europe and see giant signs on the highway “FKK Camping x kilometers.” It no harder than finding a MacDonald’s. Countries outside the german speaking area, like Hungary, also use “FKK” because folks know what it means. What an amazing change to time and place. On the internet, I learned that near Vienna, part of the Danube Island has an area designated “FKK” for nude swimming. The “Donau Insel” is a man-man island 21 km long, 70-200 meters wide, created by dumping the sludge from dredging the Danube between 1972 and 1988. There are no cars but it is used for cycling, rollerblading, swimming and canoeing. There are a few bars and restaurants and (hard to believe) a swimming pool. It gets about 3 million visitors a year and has one of Europe’s largest music festivals. I had a visitor from home in Canada and we traveled by subway to the Island and trudged endlessly in summer heat looking for the nude area. We finally gave up and just plunged in between the bushes on the river bank. Nobody
complained.

Years later, an American woman, living in Vienna told me that I should have gone south instead of north when I visited the island earlier. She and I cycled from Praterstern Park onto a bridge for pedestrians and bikes and down a spiral ramp onto the island and pedaled south to the big FKK sign. 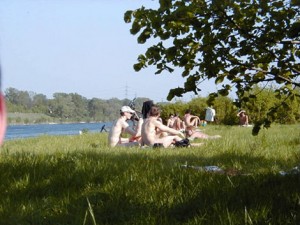 Another time I tried to walk that distance because I was in Vienna without my bike, but it seemed so far that I gave up and again just jumped in. Again, nobody complained. The amazing news is that across the river channel, on what you might call the mainland, there is a bus (92B) that takes you to 5 different stops along huge huge FKK area. (I put the details at the end). Every one of them connects to the nude part of the Danube. There are a number of parking lots right off the highway, just a few meters from the nude area. Most have a restaurant or snack bar. At one of them, you do not need to dress at all to get served. No coded directions, no mysterious mailboxes. Nudism is so popular that the area filled with
naked people has expanded westward, so in practice, it is double the size demarcated by signs, in reality, a total of 8.6 km long altogether, in 2 areas on the island and a long area on the “mainland” side of the river.

There are interesting differences between the two sides. Where access is easy, everyone has a camp-bed for sunning, often with an extra shade above the sunbather’s head so one’s eyes do not get fried. The crowd is older and less fit (car dependent). On the Danube Island side, there is almost no garden furniture, people come by bike or walk (a LONG way). They are less obese. The area is also not 100% nude but a mix of clothed and unclothed, including a gay men’s section (unmarked, but clear enough).

My conclusion is this feels like a victory. This is what the world will be like when we have “won” acceptance for nude living as gay rights are winning acceptance now. You do not have to pass a background check. You do not have to demonstrate that the person you are with is your legal spouse. There are no fences. At smaller nudist clubs the fences are necessary to keep out trespassers and gawkers, it gives me the feeling I am in a zoo or a minimum-security prison. This feels like punishment for having bizarre ideas that are “shocking” to so many respectable people. There are no security guards and no posted rules. It is the dream of anarchists that people use common sense and regulate themselves. This is a taste of the world as it could be.

How to get to the FKK on the Danube in Vienna: 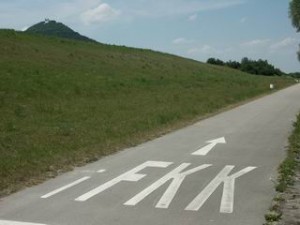 You can drive by car along Refinerie Strasse (if you want to contribute to global warming). S-bahn line 1 takes you close to the Island but far from the nude area.

Take subway line 1 to “Donau Insel” and proceed on foot or with your bike.
From subway line 2, you can get off at “Donau Marina” and walk or cycle. If you continue Northeast on line 2, get off at “Donau Stadtbrücke” and take bus 92B. The stop “refinerie Straase- Biberhaufen” lets you off at Pizzaria Angelo. Just look over the bank and you see th beginning of the informal nude areas. There are risers, as in a stadium, where people sunbathe to warm up from the river.

If you disdain the busy mainland side, you can walk over the “Steinsporn” bridge and go directly to the Danube Island. (I do not recommend this short cut since you will be a long way from the nude area on the island.) Most of the mainland side has three “benches”. Two are grassed and the one closest to the water is paved with asphalt for easy cycling. 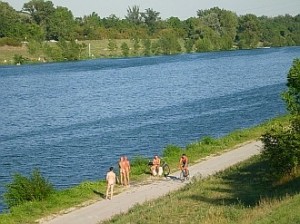 The next bus stop “Frachthof Labau Hafen” has the Mosquito Fish and Grill restaurant and a public toilet. Continuing east the official FKK sign is posted and there is a snack bar with the odd name “Zur Kurvin”. A much larger Villa Restaurant was closed on my last visit and it had a sign “boat rental.”

Then you reach a pontoon bridge for pedestrians and cyclists. Each end has 2 enormous yellow pipes slanting skyward for no known reason. This takes you to Donau Insel. The Uffer Gasthaus is at the next bus stop “Finsterbusch Str. Mitte” where there is also a public WC.

The next bus stop Finsterbusch Str. Öl Lage” has the Jamaica Beach restaurant which serves nude customers. A little further on there is a bridge with no posted name (“Zweite Wier Brücke” is the hidden name) which marks the end of the nude area on the mainland side.