Top End Naturist Recreation Retreat is a family operated resort catering for the nudist family and is NOT clothes optional. Situated in a secluded 100 acres of natural bush land in the picturesque Shire of Litchfield, TENRR is the perfect place to relax and switch off the outside world.

This place surprised us.

I guess not every Sydneysider would consider Darwin as a weekend getaway. However we’re not like every Sydneysider so we headed off to the Top End Naturist Recreation Retreat (TENRR) for the October long weekend and we were very pleasantly surprised by what we found. To describe TENRR as being located out in the scrub south of Darwin would be an accurate description however it is so much more than that. Certainly the environment in which it is located is reflective of the harsh Northern Territory climate and as we had arrived towards the end of the dry season and this aspect was certainly accentuated. But the retreat itself could be described as an oasis in the middle of it all. We had booked a cabin and while it appeared to be a metal box with windows this was simply to deny the millions of termites a free feed. Inside it was comfortable, cool and had all of the facilities you’d expect. With our rental car unloaded, and our bodies similarly unencumbered, we grabbed a drink and headed off to explore the place though we didn’t get much further than our first stop which was the pool. The pool is quite reasonable in size and we felt that to fully appreciate it we should spend an hour or more sitting in the shade beside it. There is also a covered common area, a kitchen and toilets and showers located mere metres from the pool for those that may be camping. While TENRR has a small shop in the office area it has no dining facilities however we can recommend the Darwin River Tavern, about seven kilometres away, for dinner. Good food, nice atmosphere, cold beer. So what’s in the area to see? Well while its an hour and a bit to Darwin and it’s nude beach at Casuarina you are located in a prime position to take in Litchfield National Park with its spectacular scenery and magical swimming spots. If you’re diligent you might even find some less populated places to swim in a manner you’d be more comfortable with. Would we go there again? Yes, in fact there’s a trip in the planning stages, and its location makes it ideal for exploring the never never. 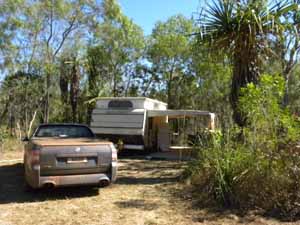